Power packed combo of Calcium and iron for kids and adults alike. They are superbly delicious and guilt free . 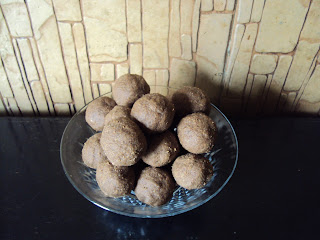 
Note : If hot nachani flour is put in grinder with jaggery , the jaggery will melt due to the heat and the mixture will become sticky preventing you from making ladoos easily.

I was inspired to try this dish when I saw some stuffed mushroom recipe posts by other bloggers. As I had some Paneer I decided to give it a try with the same. The resulting dish was very satisfactory and delicious.
You can have it as a snack with some ketchup or as a side dish with the dinner. 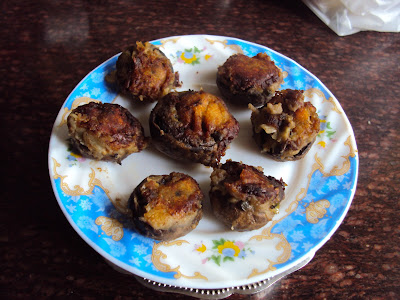 Thoroughly wash the mushrooms to remove all the dirt.
Remove the stalks of the mushrooms and finely chop them.
Heat ghee add onions, green chillies and saute till onions are tranparent.
Add chopped mushrooms stalks.
When they are cooked add mashed paneer, pudina, garam masala, salt and sugar.
Stir for 2 minutes and remove from fire.
Stuff the mushrooms with this mixture and cover them with the layer of potato mash.
Smear a non stick frying pan with ghee and arrange the mushrooms on it.
When cooked on one side turn them and brown the other side.

A non-vegetarian  gravy dish which can be had with rotis or parathas along with some raita. 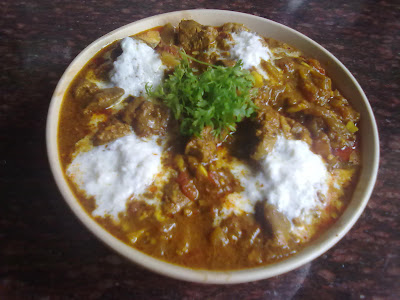 Cut each liver into 2  to 3 pieces .
Apply turmeric, salt, garam masala.
Add onions, tomatoes, chillies, ginger garlic paste and corinder pudina.
Keep all this marinated for at least 2 hours.
Heat oil in a non stick kadhai .add all the above mixture and cook cook covered with lid.
When the liver is cooked add milk, and half the fresh cream and again cook for 10 minutes.
Decorate with remaing fresh cream .
Serve with cut onions and lemon wedges or with some raita.

A dry dish prepared by stuffing parwar with besan mixture. The resulting dish is very yummy. 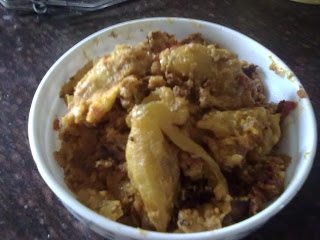 Wash the parwar well and peel the skin .
Give two vertical cuts to parwar as we give cuts to brinjal while makeing bharli vangi (stff brinjal).
Remove the seeds carefully keeping the parwar intact.
Mix together besan, onion, chillies, turmeric, goda masala , cut coriander and salt by adding little water.
The consistency should be much thicker than that of bhajia batter.
Stuff this mixture in the parwar.
Heat oil in a pan.Crush the panch poran seeds a bit and add them.
After they splutter arrange the parwar .
Dilute the remaining stuffing mixture with water , add  and cook with the lid covered.
After 5 minutes turn the parwar and let the other side also cook.

You can use any small dry variety of prawns ( jawla or galba). Normally dry fish dishes are done during monsoons when fresh fish is not available in the market. 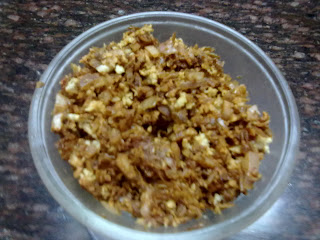 Heat coconut oil in kadhai and roast the prawns till crispy.
Let them cool.
At the time of serving heat a piece of coal till red on direct flame.
In the meanwhile add onions, coconut, chilli pd, salt and tamarind pulp .
Mix well.
Take a small katori . Make depression in the kismur and keep the katori.
Keep the red coal on it pour some coconut oil and immediately cover with lid.
This imparts a very unique flavour to it.

These protein rich Parathas are equally yummy and filling. You can totally avoid the cheese if you don't want it. But the addition of cheese does make a very big difference in taste. 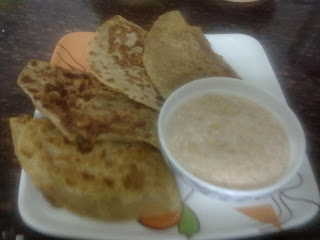 
Soak Rajma for 6 hours and pressure cook till soft.
Knead a dough with wheat flour salt and water.
Heat oil in a kadhai and add chopped onions.
When onions are soft add tomatoes, chilli pd, haldi and garam masala.
When cooked add rajma,half mash it and add salt .
Remove from fire and mix chopped pudina and mix well.

Now make a thick roti  of the dough .
Spread the mash on half the roti sprinkle some grated cheese.
Fold the roti into half and little from below.
Make parathas on tawa by smearing ghee on both the sides.
Serve them hot with bundi ka raita and pickle.

A no hassle sabji which is tangy, sour, hot and spicy. The trick is to add all the ingredients except potatoes in excess as per your taste. 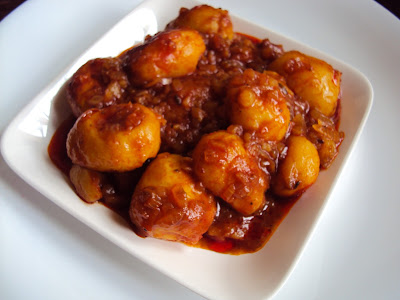 Boil the baby potatoes and remove the skin.
Soak the tamarind in water to get the soft pulp.
Heat the oil when hot add chopped onions.
When onions are soft add haldi, chilli pd, potatoes and salt.
Add tamarind pulp and cook.
The vegetable should have little gravy.
Putting more oil, chilli, haldi and tamarind makes the dish more tasty.
The sabji should be very hot and sour .
Consume it in smaller quantities .


A daal which is a must in almost all karwari homes on a weekly basis.
I usually have it on Monday mornings for our lunch.
This daal along with the batata phodi (see the recipe here) is a deadly combination. 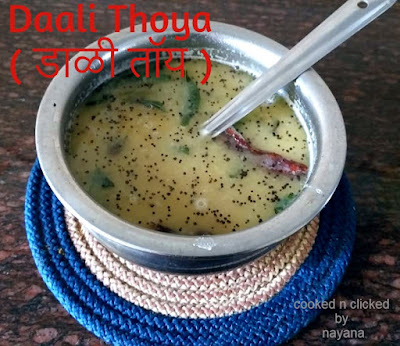 Toya is usually thinner than the other dals.

Then heat ghee in a small vessel .

Add this tempering (phodni) to the toya and immediately cover the vessel with the lid.

Pasta made healthy and guilt free with lots of vegetables. I have added  cheese as we like the cheesy taste.
But weight watcher can totally omit it.It tastes superb without cheese also. 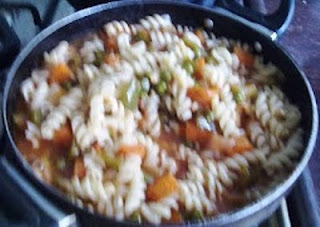 Cut carrots, capsicums and onions in 1/2 inch cubes.
Chop the tomatoes fine.
Heat butter add carrots when half cooked add onions and capsicums .
Also add chopped tomatoes, basil, oregano and pepper powder.
Stir fry on high flame for 5 minutes  remove and keep aside, let the vegetables be cooked but crisp.
In a big vessel add lots of water add salt and bring it to boil.
When the water boils add pasta and cook till just done ( cooked but firm).
At the time of serving heat some butter in kadhai and mix the cooked vegetables and pasta ,add tomato ketchup, grated cheese and serve hot.

Pulav which goes well with any spicy Veg or Non- Veg gravy dish. 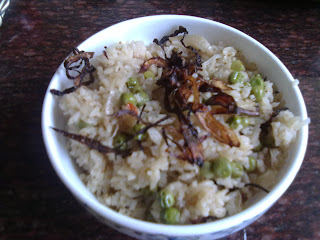 Heat ghee and fry cashew and raisins and keep aside.
Fry some onion till crisp , keep aside for decoration.
In the same ghee stir fry remaining onion till transparent and soft .
Add washed rice and stir for 5 to 10 minutes .
Add garam masala, salt, water and cook till done.
While serving decorate with fried onion, cashew and raisins.
Posted by nayana at Thursday, July 19, 2012 No comments:

A very tasty maharashtrian snack . One of our family favourites. 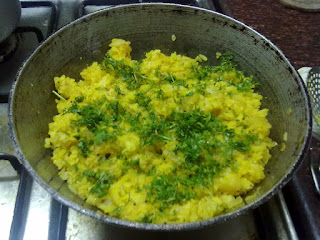 Heat the oil and add mustard seeds.
When they splutter add cut chillies and onions and cook till soft.
Add potatoes and cook till soft by covering the lid
In the mean while wash the poha and soak in water for just 2 minutes.
Then squeeze the water and spread and keep.
When the potatoes are done add poha , haldi, salt and sugar.
Stir nicely till every thing is mixed . Cover the lid and cook for 5 to 10 minutes.
Add lemon juice and serve garnished with  coriander leaves and grated coconut.
Posted by nayana at Thursday, July 19, 2012

A very simple, no hassle dish , yet sure to give you lots of praises. A must try for all non-vegetarians. 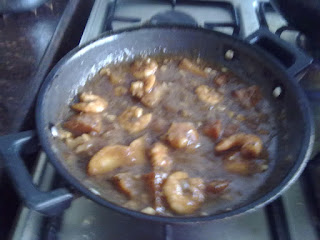 
Shell the prawns and remove the black thread present on the back side of the prawns.
Heat butter in the kadhai .
When hot add chopped onion and garlic.
When onion becomes transparent add the potatoes.
When the potatoes are half cooked add prawns and stir till they turn light pink.
This should take 5 to 10 minutes.
Add salt and pepper powder and cook till soft, dont overcook or prawns will get rubbery.
While serving heat the kadhai and add cornflour paste make in half glass water for thickness.
Posted by nayana at Tuesday, July 17, 2012 No comments:

These are my personal favourite . On a Monday , to have a lunch of batata phodi with Toya  ( a watery karwari daal ) is a heavenly pleasure.

(See the recipe for Toya  here ) 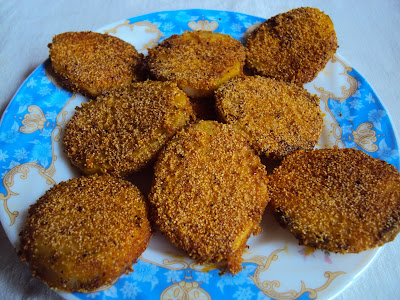 Apply little salt to potato slices and keep aside for half and hour.

Mix all the masala powders with rawa.

Heat the tawa and smear it with oil.

Turn after 5 minutes and cook till crisp and done on both sides.


The ajwain leaves curry which is delicious as well as  very healthy and good for stomach.

Remove tender leaves of Ajwain plant and wash properly.
In a kadhai heat 2 tsp ghee and fry jeera, pepper and chillies , put leaves and stir for some time.
Grind all this with some grated coconut .
Add salt to taste and some curd for the sourness.
Serve with hot rice topped with ghee.

A delicious bengali chana daal . Raisins and cashew make all the difference.


Boil chana dal in cooker with vechi, dalchin and bay leaf till soft but the daal shout be intact.
In a Kadhai heat ghee , add raisins and cashews and keep aside.
In the same ghee add jeera, 2 red chillies, daal and all remaing ingredients and cook well.
Dont make it too watery it sould be thick in consistency.
Add raisins and cashews fried in ghee and sprinkle coriander leaves.

A very easy but yummy recipe which can be made within minutes. It hardly has any ingredients but tastes like a chinese vegetable.

Heat oil add crushed garlic and cut pieces of dry chilli.
Then add carrot , salt and cook on high flame for 5 to 10 minutes.
Do not overcook keep little crisp.
Posted by nayana at Friday, July 13, 2012 No comments:

A simple dry dish make out of cauliflower

Heat oil in a kadhai .
When hot  add mustard when they splutter,lower  make the flame.
Add haldi, chilli, hing immediately and then add florets and salt .
Cook without keeping the lid till cooked.

Grind together coconut with garlic, chillies and 1 kokam .
Strain the mixture and take out the milk of coconut.
Repeat this 2 to 3 times more till the juice is no more milky.
Add salt and kokams to this strained mixtureper required .
Heat ghee in a small vessel when hot add mustard seeds and let them splutter.
Temper the kadhi with this ghee.
Immediately cover the kadhi with the lid.
Posted by nayana at Friday, July 13, 2012 No comments:


An all time favourite egg dish which has never failed to impress my guests .
Looks pretty tastes delicious. 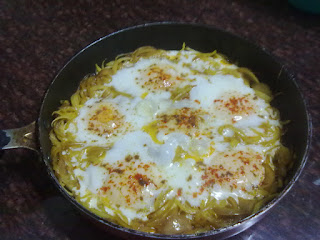 
A sweet karanji made of ratali . Can be had on fasting days .

Knead a dough with mashed sweet potatoes , rajgira atta and milk add little salt to taste.
heat ghee add grated coconut and jagerry stir when the jagerry melt and mixture solidifies a little add elaichi.
roll out small puris of the dough, stuff them with the above mixture and fold the puri in a semicircular shape . seal the edges with water.
deep fry in ghee or shallow fry on a pan .
Posted by nayana at Thursday, July 12, 2012 No comments:

A easy and tasty potato preparation especially for the fasting days.

Heat ghee add potato pieces , pepper powder and salt and stir fry till crispy and little reddish brown.
Do not cover while cooking.
Posted by nayana at Thursday, July 12, 2012 No comments:

Email ThisBlogThis!Share to TwitterShare to FacebookShare to Pinterest
Labels: Food for fasting, Potatoes

A dry vegetable dish made out of dill leaves


A tasty snack made with leftover chapatis. 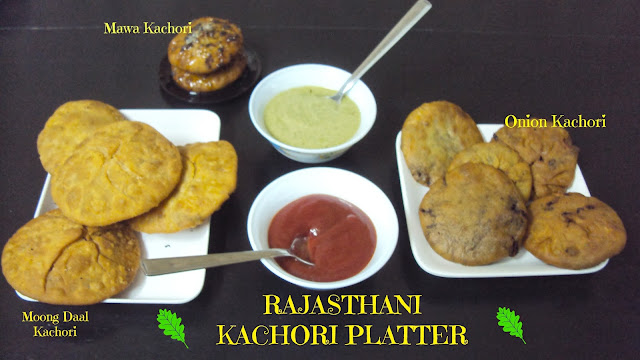